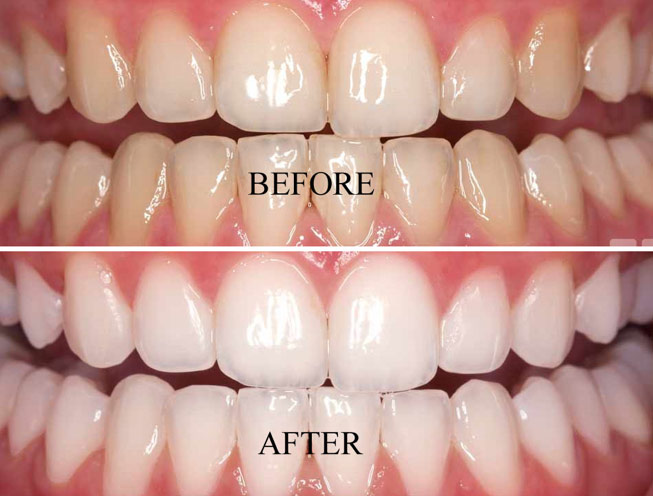 Tooth whitening or tooth bleaching is the process of lightening the color of human teeth.[1] Whitening is often desirable when teeth become yellowed over time for a number of reasons, and can be achieved by changing the intrinsic or extrinsic color of the tooth enamel.[2] The chemical degradation of the chromogens within or on the tooth is termed as bleaching.

Figure 1. Before and after tooth whitening.

Hydrogen peroxide (H2O2) is the active ingredient most commonly used in whitening products and is delivered as either hydrogen peroxide or carbamide peroxide.[1] Hydrogen peroxide is analogous to carbamide peroxide as it is released when the stable complex is in contact with water. When it diffuses into the tooth, hydrogen peroxide acts as an oxidising agent that breaks down to produce unstable free radicals. In the spaces between the inorganic salts in tooth enamel, these unstable free radicals attach to organic pigment molecules resulting in small, less heavily pigmented components.[3] Reflecting less light, these smaller molecules create a “whitening effect”.[3] There are different products available on the market to remove stains.[1] For whitening treatment to be successful, dental professionals (dental hygienist or dentist) should correctly diagnose the type, intensity and location of the tooth discolouration.[3] Time exposure and the concentration of the bleaching compound, determines the tooth whitening endpoint. 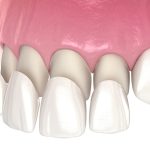 If you have any query

The NuBrace Invisible Removable Orthodontics system is a revolutionary advancement in the orthodontic field, providing the convenience and comfort of removable teeth-straightening systems

Lost your password? Please enter your username or email address. You will receive a link to create a new password via email.